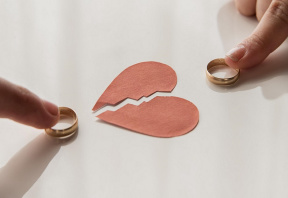 Parties may begin their negotiations based upon an MoU. A memorandum of understanding is less formal than a contract but legally valid. A memorandum of understanding may sound similar to a contract, but the two are not the same. A contract, for example, is a private written agreement that is legally binding and enforceable by a judge, unlike an MOU.

An MOU is a formal agreement; it is generally not legally binding. Instead, the MOU is used to show that each side is willing to do everything it takes to advance a contract ahead. A memorandum of understanding defines the objective and scope of negotiations. In other words, the MOU serves as a starting point for discussions.

The "MOU" in a Mutual Divorce enables parties to settle out of court. It is only then that the parties enter the courtroom to obtain the decree for divorce on mutually accepted grounds, of which the "MOU" is created first and then the "Separation Agreement."

It eliminates the possibility of further litigation and finalizes the divorce based upon mutual understanding. During the separation, the "MOU" is the document to rely on. The MoU lays down the boundaries of the division of assets among the couple. It restricts the rights and liabilities, assets and debts, and other numerous claims that one can have against another. The MoU also addresses the principal claims for maintenance and alimony. It contains all the terms that may become contentious later on and concretizes them in writing.

People Also Read: What Rights Does a Women Have in her Husband's Property?

MoU for Divorce by Mutual Consent

A Memorandum of Understanding (MOU) is an agreement signed between husband and wife when they divorce mutually. It outlines the terms for mutual divorce. The couple can then submit this before the court. This type of document also explains the goal of a particular course of action.

It pledges the understanding to write, making it legally obligatory to enforce the agreement. One may sue the other party for violation of such a contract. The distribution of assets and liabilities must be clearly stated in "MOU". An "MOU" like this also protects the husband's interests against fraudulent charges of Domestic Violence and 498A cases after the divorce.

It serves as a complete and final settlement, after which no further permission of lawsuit regarding the breakup of the marriage is given to the Husband and Wife. However, if either of the two parties breaches the terms of the "Separation Agreement," the aggrieved party has the legal right to sue the person responsible for the violation and force particular performance by the MOU signed.

People Also Read This: Who gets the child’s custody anyway?

Once Your MOU is completed it would be ready to be submitted into the legal system. Both parties must sign the Separation Agreement. In the presence of a notary public, acknowledgement of everyone's signature must be done. The couple does not need to appear in front of the notary simultaneously or utilize the same notary. Clients can have a single impartial attorney process the MOU for both of you, or the spouses' separate attorneys can collaborate on the final Separation Agreement. When both parties sign and notarize the Separation Agreement, it becomes legally binding. Enforcement of agreements, if either spouse breaks the terms. You cannot backdate an agreement to take into account the period before separation. Only until both spouses have signed and notarized the agreement are you officially separated.